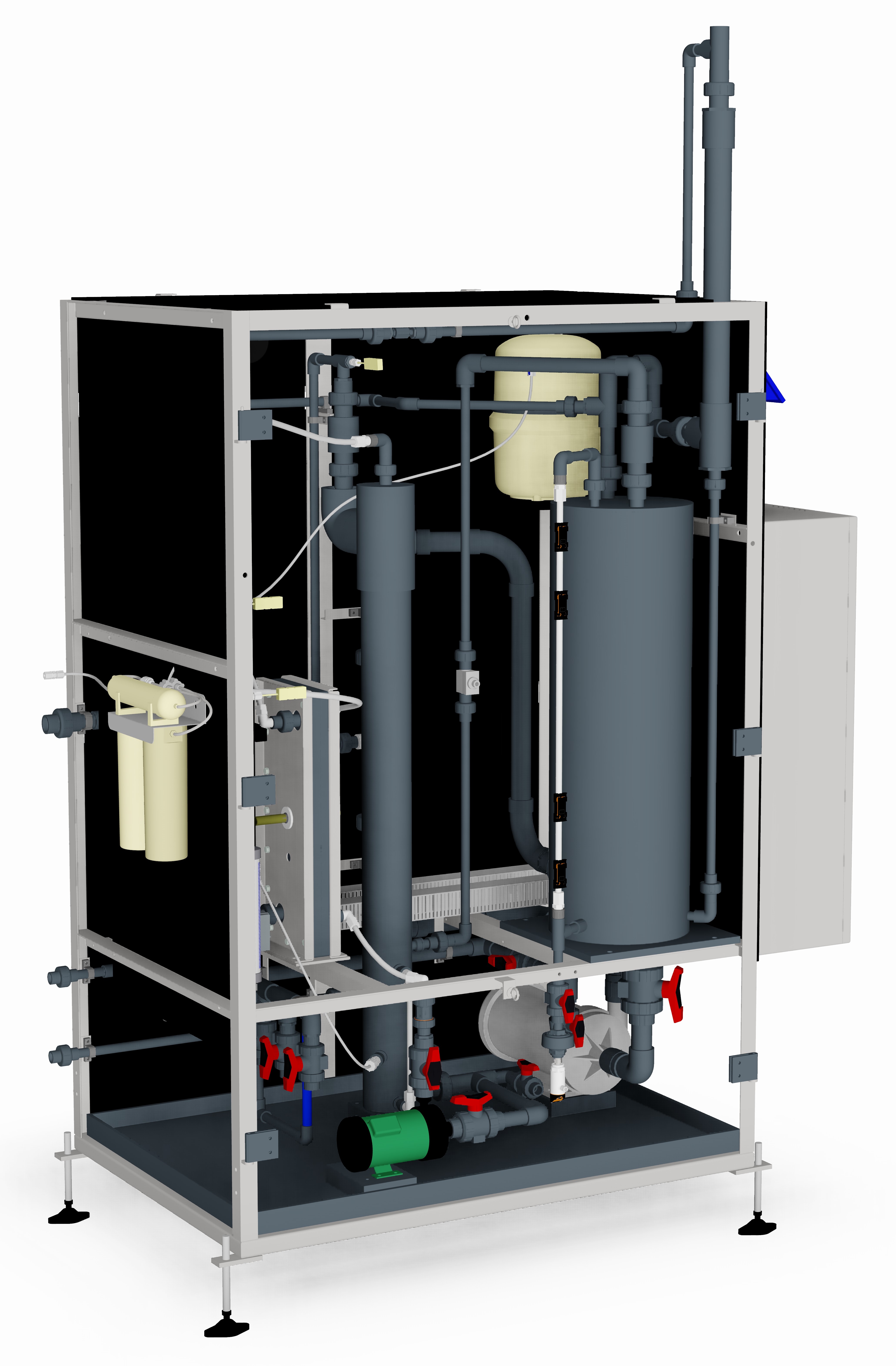 Chlorine Dioxide is ideal for water disinfection for potable consumption; food and beverage applications involving water for washing and as an ingredient and industrial water circuits for bacterial, slime and biofilm control. Potable water disinfection produces no THM’s and very low AOX. ClO2 is pH independent and generated on site. Chemical dosing systems are simple and compact. We can provide the following types of chlorine dioxide generation:

What is Chlorine Dioxide?

Chlorine Dioxide has the chemical formula ClO2 and is a yellow to brown coloured gas at room temperature and pressure. It is a highly reactive oxidant and for all practical areas of water disinfection, it must be generated on site using proprietary reaction and dosing equipment.

There are a large number of Chlorine Dioxide generation reactions. However, not all of these are commercially suitable for water treatment or water disinfection. The following four are the most common. Please click on the links for information on systems we provide

There is a difference between chlorite conversion and overall conversion. Typical chlorite yield for an acid-chlorite generator varies between 65-68%. Overall conversion efficiency is much lower than this, as much of the acid remains unreacted.

For low capacity generation, 2-chemical acid-chlorite is a simple process which can be installed and operated at low cost. The low conversion efficiency of this process may be unacceptable when the output of ClO2 is higher (>100 g/hr). The chlorine-chlorite generation process operates at 95-98% conversion. Similarly, the 3-chemical generator operates at > 95% conversion. Electrochemical production of chlorine dioxide using the Electricide CDE generator can produce chlorine dioxide at 95-99% purity and greater than 80% chlorite conversion. Overall chemical conversion is the same as chlorite, as there is only one chemical precursor.

The Electricide CD2D and CD2C acid-chlorite generators can operate in continuous or contiguous mode. In continuous mode, the generator dosing pumps add chemical into the reaction chamber and this chamber doses directly into the water stream by-pass. In contiguous mode, chlorine dioxide solution is generated at 2,000-5,000 ppm into a storage tank via level control. Metering pumps dose from this storage tank to multiple locations.

Most chlorine-chlorite generators operate on a contiguous basis. An intermediate storage tank of approx. 200 – 500 L contains the chlorine dioxide solution at a concentration of around 5 g/L. This tank is level controlled and the low level turns on the generation process at a fixed rate. The tank then fills up and stops at the high level. Metering pumps dose the chlorine dioxide solution from the storage tank into the water to be treated.

Pure chlorine dioxide will react with NOM (Naturally Occurring Organic Matter) such as humic and Fulvic acids to form a number of oxidised organic compounds such as carboxylic acids and aldehydes in the ppb concentration range. No formation of chlorinated organic by-products will occur unless chlorine is present in the reaction mixture. THM’s will only be formed with the chlorine-chlorite process.

Chlorine Dioxide can be measured with a comparator or photometer using DPD1 as reagent. Measurement is easy with the electrochemical or acid-chlorite process as no chlorine will be present with the chlorine dioxide. However, the chlorine-chlorite process will mean that treated water will contain both chlorine and chlorine dioxide. Both of these species will react with DPD1 so differentiation of just ClO2 will not be easy. In this case, the preferred testing regime is with Lissamine Green B reagent. This method is not cross-sensitive to chlorine.

Ammonia Nitrogen: No reaction. This can be a good thing if Chlorine Dioxide is being utilized for disinfection of water where ammonia is present. This is typically the case in some cooling towers where control of TPC and Legionella is required. Waste water or recycled water can contain high ammonia concentration so chlorine dioxide is a great alternative to chlorine to achieve disinfection where chlorine would not be effective.

Iron: Iron is often present in ground water and various industrial waste waters as either ferrous ion or compounds containing ferrous ion. In the case of potable water, it is important to remove this soluble iron so that contamination of the reticulation does not occur by the precipitation of ferric oxide.

If Chlorine Dioxide is dosed at a rate of 1.2 parts of ClO2 per part of iron, oxidation of ferrous to ferric will occur, causing rapid precipitation of ferric hydroxide. This reaction is essentially pH independent and is very quick. Chlorine Dioxide can be dosed at the front end of a water treatment plant e.g. before clarification or sand filters and the ferric oxide will either settle out or be captured in the sand filter bed. Thus, it is removed and problems such as brown staining of clothes and bacterial regrowth will be avoided.

Manganese: Manganese is often present in ground water as Mn2+ ion. Chlorine Dioxide can be utilized to remove manganese by oxidation of the Mn2+ to MnO2 which will precipitate out. The advantage of using ClO2 over other oxidants is firstly speed: ClO2 reacts with Mn2+ very quickly so the reaction will be complete by the time the water reaches filters or settling tanks. If Chlorine is used, the reaction is slower so some MnO2 may precipitate out in the reticulation causing black staining of clothes. Secondly, the possibility of forming permanganate is avoided with Chlorine Dioxide. Oxidation of Mn2+ using ozone is possible but overdosing will produce permanganate ion which will impart a pink color to the water. It is not possible to overdose with ClO2 as the oxidation reaction cannot proceed all the way to permanganate and excess ClO2 will be employed for disinfection.
2.45 parts of chlorine dioxide are required per part of manganese.

Reaction in neutral or alkaline conditions will result in Chlorine Dioxide forming chlorite ion as by-product. As the concentration of chlorite is regulated in most water supplies throughout the world, the maximum concentration of Mn2+ which can be oxidized is therefore limited by the chlorite regulatory limit and the stoichiometry of the reaction.

Manganese is effectively oxidized by Chlorine Dioxide when humically bound in complexes. Chlorine is not effective for this purpose.

Sulfur Compounds: Under the appropriate conditions, it is possible to utilize all the oxidizing power of ClO2 to convert sulfides, H2S and Mercaptans to sulfate ion. With chlorine and ozone, colloidal sulfur will be formed which may or may not be desired.

Oil and Gas waters. Chlorine Dioxide is the disinfectant chemical of choice in the oil and gas industry. One major area of interest is the treatment of frac water.

ClO2 is an effective and powerful disinfectant. It is capable of inactivating bacteria and viruses, spores and moulds. Inactivation of Giardia is possible with low doses and Cryptosporidium Parvuum with a CT value of 78.

Chlorine Dioxide produced by the electrochemical or acid-chlorite processes will not produce any THM’s upon reaction with organic matter. THM’s are regulated in most water supplies so this is an advantage for ClO2.

If this ident code is correct, please enter your contact details and press submit to obtain a quotation

This window will close in 10 seconds